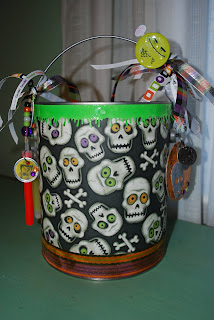 I love Halloween, so this year I decided to take on not only the daunting task of creating my two sons' costumes but also making them Halloween Trick or Treat Buckets! And they turned out awesome, if I do say so myself!! Well, the boys loved them and that's all that really matters...

I created two of them, one for each boy, and only slightly varied the appearance between the two.

I started with an empty paint can and covered the body of it with Heads Will Roll paper from K&Company. I then cut a strip of Halloween Purple Stripe paper from K&Company and coated it with Tim Holtz's Distress Crackle Paint in Clear Rock Candy. After it dried and before I adhered it to the bottom of the can, I rubbed on Tim Holtz's Distress Ink in Dusty Concord. For the slime on top of the can I used Martha Stewart's Drippy Goo Border Punch on a strip of green paper. I then coated the strip with JudiKins Diamond Glaze to give it that real slime look! To make it look even more real, I let the air bubbles remain instead of trying to get rid of them. 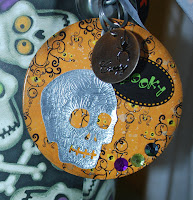 For the embellishments on the left side of the can I used two glow sticks. Attached to the glow sticks are some beads and tags that I created using a mix of distress inks, stamps, stickers, and rhinestones. On the left hand side, I used a chipboard circle that I added a skull, sticker, and rhinestones to. The skull was made using Martha Stewart's Skull Punch and I painted a coat of Tim Holtz's Distress Crackle Paint in Brushed Pewter. I also added a Making Memories Spook Alley Metal Charm to each bucket and used lots of ribbon (mostly from American Crafts). The little monster attached to the top of the handle is a little blinking light clip that I got from Target. 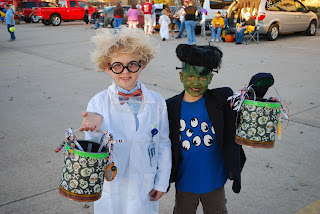